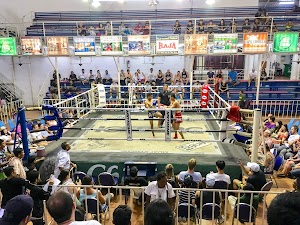 Banglaboxing Stadium
4.2 out of 5 stars

Muay Thai is a martial art from Thailand with outstanding technical necking duel , which is both physically and mentally. For fighting, use the body as a weapon. It is known as the “weapon”, which consists of physical attacks on both fleas, elbows, knees and feet, if prepared for physical well. Causing weapons of mass boxing has become prevalent internationally in the early twentieth century. When the Thai boxer could win a fight with a reputation in other fields , which competed in professional boxing.The Real Fight Thai Boxing will be held @ Bangla Boxing Stadium Patong Beach Thailand . The Stadium is behind Jung-Ceylon Shopping Mall and opposite Baan Zaan Market. You See Muay Thai. You See Thailand.

* Last-minute booking of less 5 PM Thai time. please waiting 2nd confirmation email. * Showtime : 09:00 PM EVERY Wednesday, Friday, Sunday Note: This is your ticket. Please present this ticket with your passport to redemption and exchange the physical ticket at the counter – Child age under 4-year-old is not allowed – Child price is applicable to children aged 5-12 years.

– This is your ticket. Please present this ticket with your passport to redemption and exchange the physical ticket at the counter – Last-minute booking of less than 5 PM Thai time. – Child price is applicable to children aged 5-12 years. – This Voucher is valid on the date of the visit as stated. – This voucher is sold for foreign visitors only. – Unable to refund or exchangeable

Day trip to Hakone in a romantic hot spring inn, from Tokyo!

Day trip to Fukuoka from Osaka with a guide by Shinkansen

Day Trip to Otaru from Sapporo with Private Transportation!

Thoughtful thoughts to your inbox